Friday I posted The New Normal: 8 Tips for Working Moms at Not Alone Mom.

It is my greatest privilege to share Stacey’s story of love and grace.  She has walked many paths familiar to women – loss of love, abandonment, abuse, looking for love only the Father can fill.  Stacey Wilson blogs at Shakin’ the Foundation and She Stands.  You will love her heart.

One would think it would be easy to write about their life, to give their testimony, but as I begin to write my own testimony I struggle where to begin. Too many words can drag on, not enough words can leave holes and wonder for those reading.  I will do my best to share my life from the beginning to where it is now in the hopes you, the readers, will see God’s love and grace with each word written.

I was chose to follow Jesus Christ at the age of six. I truly didn’t understand the importance of such a wondrous decision, but seeing all the “big” people take their walk to the altar, I knew I wanted to as well.  I tugged on my Daddy’s sleeve and as he bent down to hear what I had to say, I pointed to the altar and said “I want to go up there.”  Looking in my eyes, he gave me permission to go. I began my walk by myself and suddenly found myself over-shadowed by the adults standing there.  I stretched my neck as far as it would go hoping our pastor would see me and reach for me. I tried my best to make my way through the crowd but to no avail. I was no closer to the front of the altar and could not be seen.

Disappointed, I remember looking to those around me, hoping someone would see me and help me get to the front.  As I continued to search the crowd, I felt two hands grab hold of me and place me in their arms, the arms of my Daddy. He had been watching me to see if I could get to the front alone and when he saw I couldn’t, he reached in and picked me up! I made it to the front!   Little did my six year old mind know, but that was the best day of my life, the day I gave my heart to Jesus.

When I was a pre-teen, my parents divorced and I was a struggling young girl. Angry that my dad left us, I slowly walked away from God.  Rejection settled in my heart and I no longer believed God loved me. If my own father didn’t want me, how could a God I could not tangibly see want and love me?  I became rebellious and angry at the world. Being the oldest of three, I didn’t want the responsibility of my siblings. I loathed having to help my mom by babysitting.  Saying I gave her “hell” on earth would be an understatement!  And my attitude did not get better as I moved into high school. 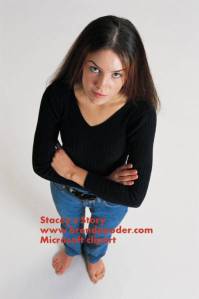 As teenager, my life was all about me and my desires.  No longer did I talk to God. My life consisted of football games, dances, parties and my boyfriend.  I was too busy for God, not to mention it was not cool to speak of religion with my friends.  By mentioning God in a conversation, you automatically became strange, off the wall and crazy in the eyes of my peers.  When things in my life became too crazy, I would pray in secret.  I was riding the fence, one foot in the world and the other on my bible.

At eighteen, I graduated from high school and got married.

After searching to be loved and after several bad relationships, I was convinced I was loved and no longer rejected.  My new husband was the one who filled the hole in my heart and life. When my first child was born, God came to my mind. I looked in her eyes and realized the love of a parent is far beyond any love the world has to offer.  I felt complete.  However, God was not the center of my life.  I prayed more, but we were living for the world, not God.  Without God as the foundation of my marriage and life, the perfect world of mine crumbled.  Sadly, after three years of marriage and a beautiful daughter, we divorced.  Once again I went out looking for “love” to fill the hole in my life, the empty spot in my heart.  The “clubbing” and parties began again.

Four years later, I met my next husband.  He came from a God-fearing family and I just knew he was “the one.”  Our denominations were different, but I over looked all the red flags. “Equally yoked” never came to mind as I once again marched down the aisle to say I do. He loved to dance as much as I did and said his prayers in secret as well. Perfect match, right?

After six months the abuse started. I never once saw through my “love blinders “ that he grew up in a house filled with rage and abuse.  It was church on Sunday and fights through the week.  At this point, I prayed out of fear. Even though there were those who are reaching down to pluck me out of the situation, I stayed out of fear.  I was emotionally beaten, physically harmed, and too scared to walk out.  After three years and another child, I finally walked – no ran – out.

Once again God came to my mind and my prayers became more frequent. I was still looking for love, so my prayers begged God to give me a man to love.  A good man I asked.  Never once had I asked for a godly man, a man after God’s own heart.

I was single for several more years and moved to another state.  I searched for God.  I attended a great church and God blessed me with a wonderful church family. I was learning and receiving His instructions. Taking baby steps, I was walking on His path.  The “rejection syndrome” would pop its ugly head up periodically to remind me I was alone as far as a soul mate here on earth. I watched others in church whose husbands lovingly prayed with them, praised them and prayed for them.  I longed for that in my life. I didn’t allow God to completely fill that hole in my heart.  I believed to be whole, I need a man. My children were happy, I had awesome friends, a great church family, was involved in my community and church and yet I was still lonely.

“How can that be?” I ask the Lord. I didn’t wait to hear His response.  Again, I took matters into my own hands and husband number three came along. He was fun, loving and was wonderful to me and my children. He often came to church with us, but never on a regular basis. I was okay with that because I thought I had all I wanted.  Those feelings were temporal.   After a few years, I  was growing in the Lord and want more.  More than my husband could give.  I now understood “equally yoked” and we were not.  I prayed, I cried, I begged, I got angry.  I yelled at the top of my lungs for God to change this man.  I did not seek God in my decision or listen for His voice, but I demanded Him to fix “us”.

I refused to go through another divorce.  By this point, the enemy of my soul was taunting me, telling me what a failure I was and how those who loved me would reject me for another failed marriage. I would disgrace children, family and friends. I would disgrace to God.  After six years of marriage my husband filed for divorce.  I believe in my heart God knew I could not do it.  I think there are things in life we try so hard to hold on to that God himself removes!  My husband left me and married another woman.  I was broken, shattered, and devastated beyond words.  The only words that could come from my mouth when praying was one….JESUS!

My healing process was a lengthy one.  Christ had to go to the root of my pain, the rejection of my Dad.  The little girl who made her way to the altar at the age of six, grew into the woman who ran from the one true love in her life…..Jesus.  Through my healing process, the Lord in all His splendor has shown me who I truly am. The world wants me to believe I am a failure.  But my Daddy God says I am victorious in Him. Just as my earthly father raised me up 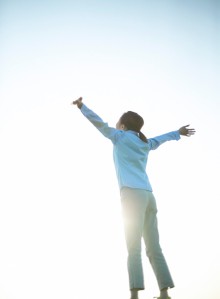 in his arms so many years ago at the altar, God himself has raised me up over all the circumstances in my life.  It didn’t matter if they were by my choosing or something the world threw at me, He placed His hands on me and placed me in His arms.

The Lord moved me home three years ago. After twelve years away it’s good to be home. My teenager has had some adjusting, but with God’s grace, she is also learning how much He loves her as well.

The Lord had me start a ministry blog in 2011 and then another one in 2012. When I asked the Lord why He would choose me to come into the ministry, after all my track record is not a great one, He spoke to my heart and said to me…” You have a story to tell.”  “ I do not call the equipped, I equip the called!”

My testimony is God’s grace in the midst of my running.  It’s God’s unfailing love when I rejected Him.  It’s His grace in my healing and His mercy in my down-falls.  It is a Father’s love that can never be replaced or taken away. It is the glory of God shining His light in the dark places of my life.

I have made many wrong choices in life, we all do. However God’s word tells us in Roman 8:28 (NIV)

And we know that in all things God works for the good of those who love him, who  have been called according to his purpose.

My life is nowhere near perfect.  I am still a work in progress.  However, I’m full of God’s love and grace. He never promised we wouldn’t have trials in life, He promised to never leave nor forsake us.  I am living proof He stood by me through all my craziness in life.  He never gave up on me and I promise, He won’t ever give up on you!

Blessings to you all,

I'd love to hear from you. Cancel reply

This site uses Akismet to reduce spam. Learn how your comment data is processed.